Did you know that 2,000 years ago people could go and see the remains of Noah’s Ark?  I found the reference in a book from the 1st Century by a Jewish historian named Flavious Josephus, which I am reading at the moment.

This is what I read from Chapter 2 of his book, Antiquities of the Jews:

“But when Monobazus was grown old, and saw that he had but a little time to live, he had a mind to come to the sight of his son before he died. So he sent for him, and embraced him after the most affectionate manner, and bestowed on him the country called Carra; it was a soil that bare ammomum in great plenty: there are also in it the remains of that ark, wherein it is related that Noah escaped the deluge, and where they are still shewn to such as are desirous to see them.”   Josephus – Antiquities of the Jews, Chapter 2.

I downloaded it as an eBook.  It can be read here: http://penelope.uchicago.edu/josephus/ant-20.html

The land of Carra is in the Armenian region of Turkey.

Were you taught this at school I wonder? 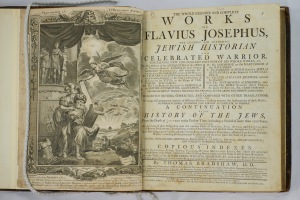