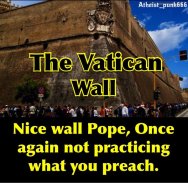 Pope Francis called Donald Trump’s plan to build a wall along the U.S.-Mexico border “un-Christian.”  That’s rich, coming from him.  The Vatican is a walled city state!

The current situation in beleaguered Europe shows us why nations need borders.  German Cabinet Official Gerd Muller said only 10% of the migrants have arrived from the Middle East and Africa.  “Eight to ten million migrants are still on the way.”  He slammed the European Union for failing to control the crisis, saying the border-free Schengen zone has “collapsed.”

The Schengen Agreement was signed by ten European nations in 1985, removing Europe’s borders.  At the same time, multiculturalism was being imposed through immigration.  Do “ism’s” ever work?

Along with multiculturalism came political correctness.  No-one’s allowed to report on the multicultural elephant in the room.  Or the Islamic camel’s nose in the tent.

Of the million strong migrants that arrived in 2015, how many of them are genuine refugees? 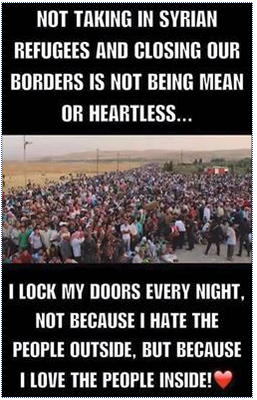 What is going to be done to protect the culture and the European people?  Boundaries are there for a reason – whether national or personal.

Boundaries are good, and they’re God ordained.  It is written “From one man God made all the nations, that they should inhabit the whole earth; and he marked out their appointed times in history and the boundaries of their lands. “ Acts 17:26

In the next verse we read “so that they should seek the Lord, in the hope that they might grope for Him and find Him, though He is not far from each one of us.” Acts 17:27

Even atheist China saw the link between Christianity and Western freedoms.  But it seems Muslims covet the gifts, but not the giver.  Are they going to seek the Lord, or will they demand their own way and seek to impose Islam on their host societies?

It’s obvious that not all religions are the same.  The Bible makes some interesting statements about religion and the land.  In Leviticus 18 God warns that if the land is defiled; he will punish it for its sin, and the land will vomit out its inhabitants.  In Psalm 68:6 we read that “the rebellious live in a sun-scorched land.”

Lets looks at the countries that Islam covers from above. 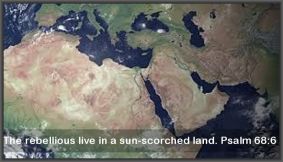 What does that tell you?  The only green spot in it besides the Nile delta is tiny Israel.  It’s the only nation that’s democratic and not Islamic.  If it’s because of a lack of rainfall, then Israel should be just as arid.

Here are some borders from around the world.  The difference between Haiti and the Dominican republic is another remarkable picture.  Haiti practices voodoo.

14 Mind Blowing International Borders From Around the World

Well, here’s an odd cover from the Economist to start 2015 off.  Who is the Economist, and why did they produce this cover?  Do they make predictions, or do they cause them?

First off, the Economist is partially owned by members of the Rothschild Banking family of England.

The Economist claims that it “is not a chronicle of economics”.  Rather, it aims “to take part in a severe contest between intelligence, which presses forward, and an unworthy, timid ignorance obstructing our progress”.  It takes an editorial stance of classical liberalism and economic liberalism which is supportive of free trade, globalisation, free immigration and cultural liberalism (such as supporting legal recognition for same-sex marriage).  Source: Wikipedia. http://en.wikipedia.org/wiki/The_Economist

Their kind of economic and cultural liberalism is wrecking countries and cultures, as they work towards their goal of a new world order.  Unfortunately it seems the majority of the world leaders are working for them and have been for some time.  Liberalism hates boundaries.

No doubt the people behind the Economist believe that they are the intelligent ones; and that is why their people on the cover are in black and white, versus the people in colour “obstructing their progress”.

We have Alice in Wonderland facing the leaders.   “Curiouser and Curiouser”, as Alice said.

The German Chancellor Angela Merkel is making an interesting sign with her hands.  Does anyone know what that sign is?  Is it related to Freemasonry?  It’s a sign she makes often – so often there was a giant poster of them in Berlin.  I gather “guten handen” would be “good hands”. Really?

At the time of writing this, Angela Merkel has insisted that “Islam belongs to Germany,” as she attempts to rein in a growing German protest movement against Islamisation.

If that were true, what boundaries will there be to protect the culture and religion in Germany (and Europe) against mosques, sharia law, a demographic time bomb and Islam’s aspirations?  What should she be reining in?

I don’t believe the protesters will be listened to.  They’ll be labelled “right-wing” and racist, and they’ll  be equated with Nazis.  Is Germany really in “good hands?”  Is Merkel serving the German people, or a hidden agenda belonging to the Globalists?

Lastly we have two arrows next to a pile of dirt with 11.5 and 11.3 on them, right in front of Alice in Wonderland.  Goodness knows what that represents.  I hope it’s not related to that awful depiction of the two-faced world and the mushroom cloud.  No doubt we’ll find out.  Sigh.

The Vigilant Citizen gives the other symbols a closer scrutiny, if you are interested;
http://vigilantcitizen.com/vigilantreport/economist-2015-cover-filled-cryptic-symbols-dire-predictions/

This is a story about two soldiers from the Western Front in World War 1, who met each other in no man’s land.  Its as true as I can get it, for its a puzzle with broken pieces, and much remains a mystery.

No man’s land can also be a place in the soul, for some things never get talked about.   While on a visit to my Great Grandmother in Gisborne (NZ), I asked her to tell me about her family, but she wouldn’t.  There was too much loss. “Don’t go there” was the silent message.  No man’s land.   So while I poked around in her shed, looking at stuff in boxes for my family history, I found somebody else’s.  It was an 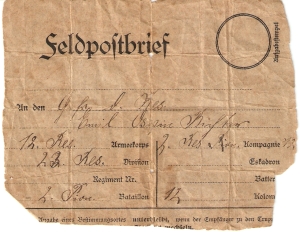 Folded within Emil’s paper was a scripture bearing a picture of Jesus and Lazarus, with verses in German. I was baffled. How on earth did it get there? Who was he?  My Great Grandmother had an Irish father and a Scots mother, so Emil couldn’t have been a German cousin. I could see the papers were from World War 1. I knew Great Nana’s brother David had died in that war.  The old photo that hung in the passage of her house depicted him as a young soldier with a solemn expression, as he stood next to his gun. Had he shot this German soldier? It was another thing I could not talk about with Great Nana. I stared at the papers I held in my hand, and debated whether to ask her about it.

Eventually I decided not to, but instead of sliding the papers back into the box I carefully folded them into my pocket. I felt the papers were too important to leave in the bicycle shed. Its just as well I did because some kids set fire to her shed not long after that. I never did

bring the subject up with Great Nana. Instead I put the papers in a stamp tin, and kept them for years.

Ypres was the place where David died, in World War 1 it was a cruel place of mud, blood, bullets, chlorine and mustard gas. The only time the guns went quiet was in the Christmas truce of 1914 and 1915.  Perhaps it was there that Emil Ospin Binthur and David Walsh met, smiling and and exchanging handshakes, not bullets.

This morning, our friend Thomas who hails from Germany helped us translate Emil’s paper and the scripture card, no easy task as the letters are printed in old German. Thomas spotted 1969 on the bottom of the card and said it was made for Easter, to commemorate a battle of 1917. The card was printed by Max Hirmer of Munich. This leads to more questions and detective work for us.

The scripture card translates “I have come back from life for living”; John 11:25  Jesus said to her, “I am the resurrection and the life. The one who believes in me will live, even though they die;” 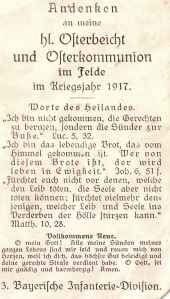 Translation:  I have not come to call the righteous, but sinners to repentance.” Luke 5:32

I am the living bread that came down from heaven. If anyone eats of this bread, he will live forever. And the bread that I will give for the life of the world is my flesh.” John 6:51

Oh my God! All my sins my whole life find sorry and repent of my heart, because I love you, insulted the highest good and your appropriate penalty deserves punishment. O God, be gracious to me! Amen

If anyone reading this knows the family of the solder Emil, we think his name is Emil Ospin Binftuz, or Binftur, or Binthur, I would like to find them.  Please get in touch with me. I would welcome any information you can provide about these papers.