This so-called Covid019 pandemic is creating financial mayhem with virtually no sector left unaffected – except for big pharmaceutical companies.  The pay-off for these companies will be huge.

So how did the big pharmaceutical companies move their product?   How were people persuaded to go and get flu shots?  The CDC had what they called a “recipe” for this.  You can see it here in this news-piece from February 2018, which shows the tactics the CDC employed through the media.  You can see the “news” was designed to elicit fear in people:

“OC Global can no longer accept any ambulances.”
“California hospitals face a’ war zone’ of flu patients – and are setting up tents to treat them.”

It turned out to be fake news.  The media wouldn’t employ that method elsewhere would they?  Given the corporate control of the media, how can we be certain they won’t?

Is fear about Covid-19, which is just another flu like Sars or Mers, being used to drum up vaccine demand?

The US National Library of Medicine has released a study used to test persuasive messages about vaccinating against COVID-19 once the vaccine becomes available.

As soon as a vaccine is here, get ready for the persuasive messages:

The study was completed July 8, 2020.  Now we wait.  Which message do you think they’ll hit us with?

Links
Big Pharma Prepares to Profit From the Coronavirus

So many in the vaccine industry violate fundamental principles of ethics

Last week, the day New Zealand went into full lock down, I was shocked at the turn of events – but not afraid of the Coronavirus.  My daughter and son-in-law felt that I was not taking it seriously enough.  I told them I would obey the lock down, but I had questions, and I felt the cure was going to be worse than the virus itself.

It’s been a week now, and I’ve been listening to what the journalists have to say.  I’m sure we’ve all seen the footage of busy hospitals fighting the Coronavirus pandemic.  But there are reports coming from the USA, Ireland and Germany about empty hospitals.

The next clip is by German journalist Billy Six in Berlin, Germany.  It has English sub-titles. 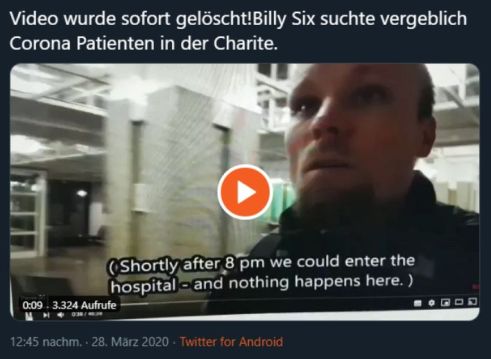 March 28 at 5:43 AM.  They’re at Charite Hospital, Berlin: “Charite Hospital sent us into Virchow Hospital … claiming all Corona cases of Berlin would be here … Emergency situation described in media doesn’t exist here.”

Why then is there mass hysteria everywhere?

Two years ago, I learned about the tactics the CDC employed through the media from a news-piece in February 2018, which showed a false flag in Los Angeles in operation, so people would go and get flu shots.

“OC Global can no longer accept any ambulances.”

“California hospitals face a’ war zone’ of flu patients – and are setting up tents to treat them.”

When the reporter from Highwire Talk went to check, she found the hospitals were empty!  So why the alarmist talk about emergencies and triage units?

The CDC admitted they were doing this, and Highwire Talk showed the CDC’s “recipe” for fostering public interest and big vaccine demand. 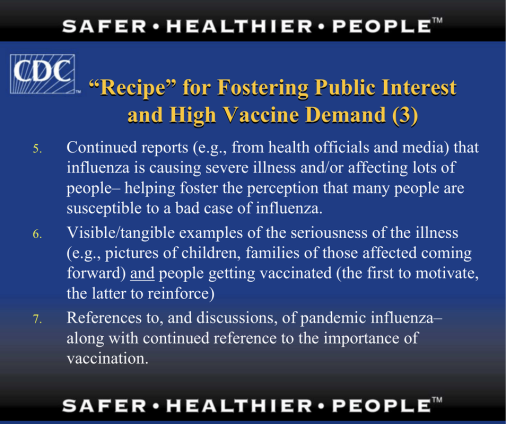 So based on that experience, shouldn’t news releases from places like the CDC be treated as advertorials for pharmaceutical companies until they’re investigated?

Note, the CDC was part of Event 201, a Coronavirus pandemic simulation run by the Johns Hopkins Center for Health Security, World Economic Forum, and Gates Foundation that began six weeks before the outbreak of this Coronavirus.

After that drill, Members of Congress dumped their stocks.

Is the CDC (Centre for Disease Control) employing the same cynical scare tactics through our main stream media so the world will demand a vaccine?  Are we being played?

Can we trust the media, given reports like this?  Are they being our eyes and ears, or are they simply propagating news releases from places like the CDC?  Who are they working for, wittingly or unwittingly?

German journalist Billy Six, Medicine vs Media: There is no dangerous corona pandemic, translated from German: “In a night-and-fog action, governments and the media-industrial complex have cut citizens’ freedom rights. “As protection against corona plague”, they say. The controlled blown-up global economy is to be vaccinated with new mega -, better tera loans. Two days of tours in Berlin’s most important hospitals show that there is no medical disaster here. And through the free media, more and more critical doctors are turning to the public – to warn.  But not of the virus…

‘We can’t trust’ whether ‘the truth’ on COVID-19 will be told: Bolt

And this from a nurse in Surrey, UK, July 16th 2020: Chaos in UK Health Care. NHS Staff Are Being Silenced Over COVID-19. “Lose Their Jobs if They Speak Out”

“The trust has been running empty ambulances during lockdown and is still doing it now. By this I mean ambulances are driving around, with their emergency alert systems active (sirens & / or lights) with no job to go to. This I believe has been to give the impression to the public that there is more demand for ambulances than there actually is. Staff only wear face coverings/ masks & social distance when public facing, as soon as they are out of public view, the masks come off and social distancing is not observed. Indeed jokes are made about the measures, and I have heard staff express amazement that despite warnings on packets and at point of sales, telling people masks are totally ineffective and dangerous , the public still buy them, because a politician has told them too.”

News from SPAIN, 19 Aug 2020 (link): I don’t know what to say about this mainstream Spanish news item, I’m kinda speechless. This front-line, clearly expert Spanish doctor reveals the reality around the truly massive media madness going on at the moment. He explains the actual reality, and the interviewer is thrown into confusion…! Then a studio journalist is brought in to sort him out – but our doc is solid as a rock – and leaves the henchman for dead! UNREAL. (subtitled)

According to this article, the CDC, a private subsidiary of big Pharma,  have been selling the Flu shot for years: THE PRIVATELY OWNED CDC PLAYED UP FLU DEATHS IN 2003 BECAUSE THE PUBLIC WAS DECLINING THEIR ADVICE ON THE FLU SHOT

More on the CDC from the film ‘Plandemic.’ 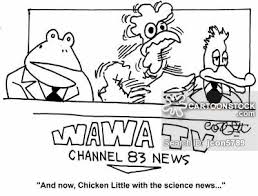 Originally I posted this and I would like to thank one of my readers for showing me the last two lines were an inaccuracy.  As a result I dug deeper and found a copy of the original article.

It really does pay to dig as deeply as possible and try to find the original source so as not to be caught out by fake news.

Judging by the news since New Year, 2018 will be full of claims of “record weather events” caused by “global warming.”  Is it true, or is it an agenda?

“The Arctic Ocean is warming up, icebergs are growing scarcer and in
some places the seals are finding the water too hot, according to a report
to the Commerce Department yesterday from Consulate, at Bergen, Norway

Reports from fishermen, seal hunters and explorers all point to a radical change in climate conditions and hitherto unheard-of temperatures in the Arctic zone.

Exploration expeditions report that scarcely any ice has been met as far north
as 81 degrees 29 minutes.

Soundings to a depth of 3,100 meters showed the gulf stream still very warm.

Great masses of ice have been replaced by moraines of earth and stones,
the report continued, while at many points well-known glaciers have entirely disappeared.

Very few seals and no white fish are found in the eastern Arctic, while vast shoals of herring and smelts which have never before ventured so far north are being encountered.

The above part is true.  You can read the entire article by clicking on the Anchorage Daily Times.

The part in red had been added to it, which I retract, although it is what the UN is claiming.

This must have been caused by the Model T Ford’s emissions. 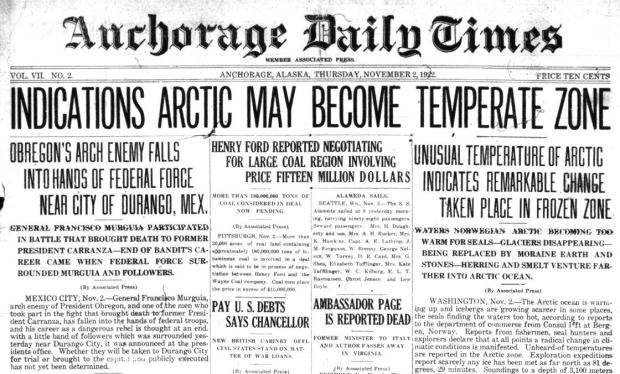 And now for that facts …

Why is fake news always bad?  Here’s the good news:

Extreme Climate Change: The 1933-1938 Period Was One of Very Severe Weather Events, Including Global Heat Waves.

My advice, turn your TV off and don’t be myth-taken.  I wish you all the best for the New Year.  Here’s some wisdom from the Bible:

“As long as the earth endures,
seedtime and harvest,
cold and heat,
summer and winter,
day and night
will never cease.” Genesis 8:22 (NIV)

See to it that no one takes you captive through hollow and deceptive philosophy, which depends on human tradition and the elemental spiritual forces of this world rather than on Christ – Colossians 2:8.

If you have an interest in the book of Revelation and would like a new, easy-to-read perspective that touches on many recent events, this book will be of great value to you.