There’s a film “Aquaman, unite the seven” in the works this year.

What does “Unite the Seven” mean, I wonder? For me, it brings to mind the beast out of the sea from Revelation.  One answer from Hollywood Reporter suggests itself immediately: It’s a reference to the seven seas, which he’s trying to unite for as yet unknown purposes.

Aquaman is a DC Comics character.  According to this child Aquaman causes a Tsunami when he sticks his trident into the ocean floor.

In the current comic book continuity of DC’s superhero line, readers have seen Atlantis attack the surface world in retaliation for an accidental attack on the undersea kingdom, where Atlantis is struck by a U.S. Navy missile, and “Ocean Master” leads the undersea forces on a revenge attack on the east coast of the U.S.

Poseidon, one of twelve Olympians, carries a trident. Can you see it in the Arabic script for “Allah?” 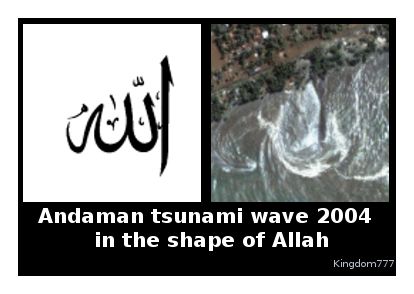 His main domain is the ocean, where he is called the “god of the sea.”  Additionally, he is referred to as “Earth-Shaker” due to his role in causing earthquakes.

Even in NZ we have a rock carving of Earthshaker.  It’s a very politically un-correct thing to say, but this carving was done by the people before the Maori.  19th-century Ngāi Tahu, who invaded the south in the 18th century, said that they did not know who had put the work there.  Notice the trident?

It’s interesting that when Jesus was asked about the time of the end, he spoke of “signs in the sun, moon, and stars; and on the earth distress of nations, with perplexity, the sea and the waves roaring; men’s hearts failing them from fear and the expectation of those things which are coming on the earth, for the powers of the heavens will be shaken.“ Luke 21:25-28

What will cause this?

The Bible speaks of a beast with seven heads coming out of the sea in Revelation 13. On each of its seven heads was a blasphemous name.  Since it’s blasphemous there will be a belief system behind each head.  Blasphemy is a contemptuous or profane act, utterance, or writing concerning God.

No doubt we’ll know more about it when we see it.

The legendary Atlantis was a kingdom in the Atlantic with seven islands and ten rulers.  One island of enormous size was sacred to Poseidon.
Source: from Proclus’ commentary on the Timaeus. http://en.wikipedia.org/wiki/Atlantis

I believe this beast out of the sea has something to do with vile trade agreements like the TPP, the Trans-Pacific Partnership.  The trade of the ruler of Babylon, a type of “King of Tyre” is mentioned in Ezekiel 28,  where through his widespread trade he was filled with violence.  The design of the One World Trade Centre incorporates the trident. 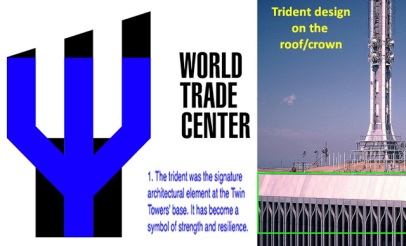 There is a spiritual side to entertainment.  Perhaps we’ll find out what the heads of the beast are by reading the comics and watching the movies.